Visitors to Melbourne Australia can enjoy a tour of the city from the comfort of a hop-on hop-off bus (HoHo bus).

Tour tickets are available for 24-hour and a 48-hour durations  During the allotted time period, passengers can embark and disembark as often as they like.  In general, the 48-hour option is more cost-effective.

In order to obtain a general overview of Melbourne, it's a good idea to remain on board for one complete loop.  On the second loop, passengers can then disembark and explore attractions of particular interest. 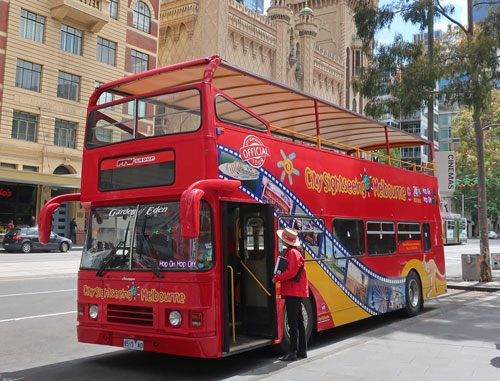 "City Sightseeing Worldwide" is one firm that offers HoHo city tours of Melbourne.  It operate two routes: the "City Route" and the "St. Kilda Route".

The Melbourne "City Route" bus stops are located at:

The "St Kilda Route" bus stops are at: